One of the most gifted potters active in Japan today, Tsujimura Shiro has a tremendous range of both glazes and forms. Influenced by Momoyama era aesthetics, he creates powerful functional vessels that are dramatic, sensual and highly unique. Unlike most of his contemporaries, who closely control the firing process, Tsujimura delights in the unexpected and incorporates chance into his creative process. 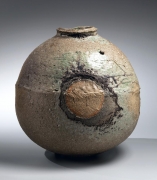