Stoneware with ash glaze and silver 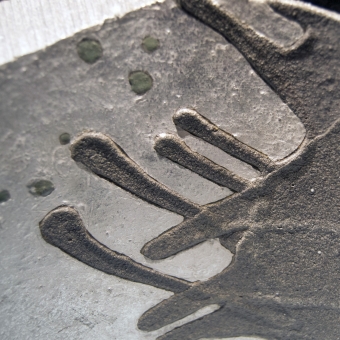 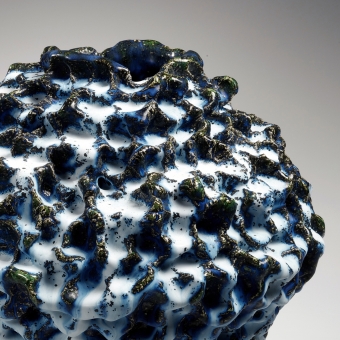 Joan B Mirviss LTD will present Double Spiral: The Sculptural Art of Hoshino Kayoko and Satoru, from May 1 through June 15, 2018. Our second exhibition devoted exclusively to new work by this celebrated couple will include over thirty works created specifically for this show. The title, Double Spiral, references not only their dual careers but also the intertwining of the spiritual and physical worlds and the balance between opposites as represented by the yin-yang symbol (taikyokuzu). As Hoshino Satoru's sculpted clay forms literally spiral upward with a powerful sense of fluidity and seductive tactility, Kayoko's work maintains a more austere appearance, twisting and turning as their faceted surfaces rotate. Both have repeatedly stated that it is the nature of clay and the interaction with human expression that leads them to their unscripted symbiotic confrontation, allowing the push and pull with the clay to lead to its own outcome.

With his hands and body as his primary tools, Hoshino Satoru fashions surging, swirling, heavy coils of clay all marked by his pushed and pinched imprints that are later submerged beneath thick copper green and matte white glazes. These bold creations, strongly referencing Neolithic cord-patterning Jōmon vessels, are from his Spring Snow series- implying that the melting of the glaze when fired, pooling into the pinched concaviites and seeping over the edges of the depressions, is like melting white snow seen against a vivid blue sky. "My works give the appearance of a rising, fluctuating form that precipitously drops to a hollow, deep concavity, as if drawn into a black hole."

Hoshino Kayoko approaches her medium without fixed ideas, allowing the clay to "speak; her forms appear as if released from a wedged mount of clay, created by chance.

As she explains: "My work starts with mixing several kinds of clay and by slapping and kneading, creating a mass of clay in an undefined shape. Mesmerized by the movement of clay itself, using a wire, I attempt to cut out the hidden, unexpected from within. It is the revelation of that inner form that endlessly inspires me."

The austere elegance of her work contrasts dramatically with that of her husband. Her distinctive sharply countoured wire-cut forms feature matte gray surfaces covered with vertical impressions made from metal tools to create a rythmic linear pattern punctuated by dark crystallizations in the clay itself. Occasionally featuring silver or ash glaze to emphasize a contrasting smooth surface, the duality of her approach to surface reflects her distinctive sensibility, which has brought Kayoko to the forefront of women ceramists on a global stage.

Hoshino Kayoko (b. 1949) moved from Kyushu to Kyoto to study ceramics before finally settling in nearby Shiga. Her medium is an unusual blend of several types of clay, most predominantly the pebbly material from Shigaraki. Cut from wedges, her forms are deceptively simple, with the feel of ancient ceramics, but also possess a distinctly modern sense of balance. She has enjoyed great renown among collectors in Europe, where she has had repeated solo exhibitions. Residing on a hillside overlooking Lake Biwa in a home built with her husband, Satoru, she draws inspiration from the surrounding landscape.

Hoshino Satoru (b. 1945) is an internationally recognized figure in the field following years as a guest artist or artist-in-residence at ceramic centers in locations as varied as Denmark, Belgium, Taiwan, Australia, Hungary and the US. At the start of his career, this Kyoto native worked for many years with the avant-garde, non-functional ceramic movement Sōdeisha. From the ancient tradition re-established by its founder, Yagi Kazuo, Satoru assumed the mantle of smoke-infused sculptural work (kokutō) that was not compromised by color or surface patterning, embodying fluidity and plasticity. Over the past decade, he has added the more colorful, evocative and popular Spring Snow series to his repertoire.

Joan B. Mirviss has been a distinguished expert in Japanese art, specializing in fine art and ceramics for more than forty years. She is the leading Western dealer in the field of modern and contemporary Japanese ceramics, and from her New York gallery on Madison Avenue, JOAN B MIRVISS LTD exclusively represents the top Japanese clay artists. As a widely published and highly respected specialist in her field, Mirviss has advised and built collections for many museums, major private collectors, and corporations.

For further information or images, please call 212-799-4021 or email admin@mirviss.com