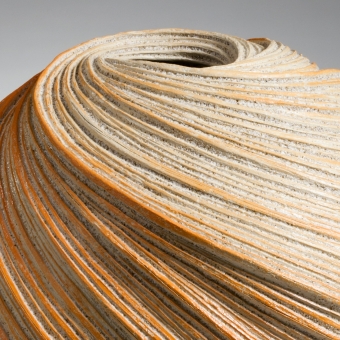 
Ebb and Flow/Movement in Clay: The Art of SAKIYAMA TAKAYUKI FROM HIS SOLO EXHIBITION AT THE IMPERIAL VILLA IN NUMAZU CITY ON VIEW MARCH 19 – MAY 2, 2008

NEW YORK: JOAN B MIRVISS LTD is delighted and honored to announce Ebb and Flow/ Movement in Clay; The Art of Sakiyama Takayuki, the artist's second solo show outside of Japan. These works, available for purchase for the first time, have been specially selected this past autumn from his prestigious solo invitational exhibition at the Imperial Villa in Numazu City.

In a country with over ten thousand active ceramic artists, where a potter can be a national celebrity as famous as a movie star, it is increasingly rare to discover a terrifically talented artist working in relative obscurity. Sakiyama Takayuki (b. 1958) is such an artist. Working from his aerie on the western coastline of the Izu peninsula, he produces powerful yet elegant stoneware vessels with forms and surface patterning inspired by the waves below.

Sakiyama's carved and rippling surface patterns reinforce the surging, spiraling nature of his remarkable double-walled vessels –– form and surface influence the other, and work together to yield objects that are both sensuous and bold. Some vessels appear as if made from sand on the beach, the surface simply decorated by the current of the receding water. Others appear to undulate and twist in space as if in perpetual motion. Their visual impact is immediate and continues to capture the attention of sophisticated collectors and curators in America. Recent works have been purchased by numerous museums in this country that include the Metropolitan Museum of Art, Yale University Art Gallery, Museum of Arts and Design, the New Orleans Museum of Art, Philadelphia Museum of Art, and the Brooklyn Museum.

Over the past few years, his work--created from Shigaraki clay--has continued to develop, becoming even more sculptural while maintaining its ties to functionality. He considers that the interior and exterior, as well as the base and top, are equally crucial in defining the artistic success of an individual object. Never repeating a shape, Sakiyama continues to explore the sculptural potential of functional ceramics. This emerging artist, who won the prestigious Emperor's Cup award two years ago, is rapidly becoming a celebrated figure. Several of his major sculptures were featured this past year at Contemporary Clay, Japanese Ceramics for the New Century Japan Society New York and


Museum of Fine Arts, Boston as well as in Tôji/ Avant-garde et tradition de la céramique Japonaise, Musée nationale de Céramique, where his powerful sculpture was selected for the cover of accompanying book as well as the poster seen throughout Paris.

In the artist's own words:

"The most critical influence in my work has been the environment. Drawn to the ocean since childhood, I have reveled in the wind, sunlight, smell of the sea, and sound of the waves. Only there can I find comfort and relaxation. Now, as I am able to view both Mount Fuji and the ocean, through both seasonal and climatic changes, I never cease to be inspired by them and this nourishes my artistic soul. In my current series of work, I attempt to capture these sensations and visual imagery so that the viewer may feel the rhythm of the waves and scent of the seaside. My aim is to meld this dual nature and create a unified work of art, simultaneously sculptural and functional."