Two shallow and one rounded bowls unevenly set within a deep, narrow-footed vessel 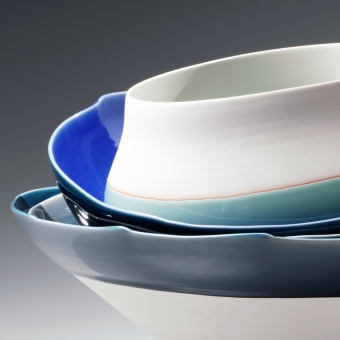 Joan B. Mirviss, Ltd. is pleased to announce its first solo exhibition of the captivating work of Fukumoto Fuku (b. 1973). A leading participant in the second generation of female ceramists to change the landscape of contemporary Japanese clay, this young artist draws inspiration from the heavens: the moon, sun, and stars, and has achieved great recognition for her ethereal porcelain sculpture.

Thinly walled, each wheel-thrown form is delicately positioned within another slightly larger vessel and fixed into position during the final firing by the melded glaze. Renowned for her throwing ability, Fukumoto is able to create forms that appear fragile and light that are in fact, though thinly walled, both strong and vibrant. The soft radiant white of the unglazed porcelain is highlighted by brightly colored, shiny glazes in varying tones of blue ranging from teal to powder blue that cover one surface of each of the stacked elements.

Fukumoto uses the medium as her guide through the artistic process. Her forms arise from a reaction to the behavior of the clay during the throwing process. She stresses how this aspect of improvisation is the cornerstone of her methodology:
“While working, I am keen to let my eyes find new discoveries, which turn the process itself into an adventure of ongoing experimentation.

The image is born from within the process with every turn of the wheel, and I must always react and remain attentive to the clay's shape and its changing condition. The form and image arise gradually, from one step of the process to another, and give birth to new creation.”

Born into a family of textile artists, Fukumoto received her MFA from Kyoto City University of Arts, where she studied under celebrated ceramic sculptor Akiyama Yō. Her works were featured in the seminal exhibition Soaring Voices-Contemporary Japanese Women Ceramic Artists, which traveled extensively to museums both in the U.S. and abroad from 2007-2012. Currently, her work is on display in Evolution of Chinese Ceramics and Their Influence at the Metropolitan Museum of Art. In addition to being actively sought after by private collectors, her works have also been acquired by American museums.