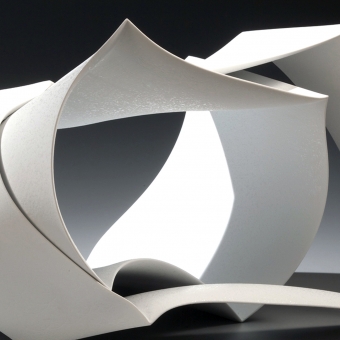 NEW YORK - As one of the world's leading sculptors working in porcelain, NAGAE Shigekazu (b. 1953) has literally recast the commercial concept of slip-casting into an art form. After decades of experimentation, Nagae has mastered his unique adaptation of this traditional method for mass-producing porcelain wares and creates elegant, sensuous white sculptures, transforming a plebian functional process into the realm of the avant-garde.

There is a remarkable balance between artistry and technical brilliance within Nagae's work; natural movement in the act of creation leads to seemingly whimsical shapes and curves, one form mirroring the other. Starting with two slightly different ikomi molds created according to the traditions of his native Seto, Nagae casts them with liquid porcelain. Following the drying and bisque-firing procedures, the two eggshell-thin forms are suspended inside one another within the kiln. The intense heat of the final firing causes them to fuse where glazed, and to further distend, bend, and drape around each other in the process. Here nature and extensive experience go hand in hand.

Nagae has won many prestigious awards, such as the Grand Prix at the Chunichi International as early as 1979 and again in '86, and more recently, the Grand Prix at the 1998 Triennal de la Porcelain in Nyon, the Mino Ceramic Festival that same year, as well as the Grand Prix at the 1997 Nihon togei-ten Japan Ceramics Exhibition. His work graces the collections of museums world-wide, perhaps most noteably at the Victoria & Albert Museum, London; Musée nationale de cèramiques, Sèvres; National Museum of Modern Art, Tokyo; Musée Asiana, Geneva; Los Angeles County Museum of Art; among many others.