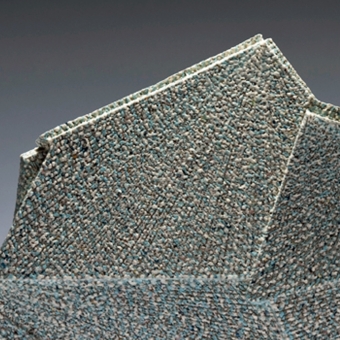 JOAN B MIRVISS LTD is pleased to announce Rays of Light: The Intricate Ceramic Art of Kishi Eiko, an exhibition of contemporary Japanese sculpture March 15 through March 19, 2008 at the International Asian Art Fair.

Unlike most Japanese ceramists, Kishi Eiko (b. 1948) works without any ties to a formal tradition or trend. She invented her own incredibly intricate technique called, saiseki zôgan, or "colored stone inlay," whereby she meticulously carves and tools her forms, incising them with delicate linear striations. Then after impressing minute indentations throughout, each small impression is inlayed with a selection of colored clays applied in a highly time-consuming mosaic-like fashion. This method is so intricate and painstaking that only five large-scale works can be completed in a single year. Each of her geometric forms is unique, fashioned first from drawings and then maquettes. Surface patterning is then considered and the delicate, textured and multi-colored patterning, in up to nine shades, delineated in perfect harmony with the form.

Following studies at Kyoto Arts University, Kishi has exhibited her work internationally in Japan, the US and Europe, consistently winning acclaim and awards since 1984. In 200l, while teaching at the Northern Clay Center, she had the rare honor of having a solo exhibition at the Minneapolis Institute of Art. Major examples of her work may be found in many private and public collections including the International Ceramic Museum, Faenza, Italy; Northern Clay Center, Minnesota; Minneapolis Institute of Arts; Museum of Art and Design, New York; Musée Nationale de Ceramiques, Sèvres France; New Orleans Museum of Art; Istituto Statale d'Arte per la Ceramica F.A. Grue, Castelli Italy. Several of her major sculptures were featured this past year at Contemporary Clay, Japanese Ceramics for the New Century Japan Society New York and Museum of Fine Arts, Boston as well as in Tôji/ Avant-garde et tradition de la céramique Japonaise, Musée nationale de Céramique.