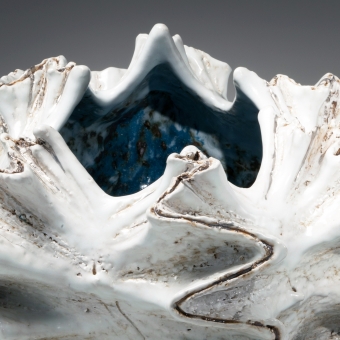 Joan B. Mirviss LTD is honored to present a major solo show of the pioneering Japanese woman artist KOIKE SHOKO (b. 1943). Titled Reflections on Nature, her exhibition will feature over 20 sculptural clay works created specifically for this presentation was shown at SOFA/NY (April 16-19) and immediately sold out. Thereafter it was reinstalled at the Joan B. Mirviss gallery (April 21-May 21).

The artist will be lecturing at SOFA in the Park Avenue Armory's landmarked Tiffany Room.
April 17th at 11:15 am
admission is free

Inspired by nature, particularly by water, Koike has always looked to the sea as a source for her forms, surfaces, and overall aesthetic. Drawing from marine life and pooling currents of water, she creates highly original sculptures that undulate and oscillate with protruding horns and pleated waves. More recently, plant forms have taken root in her artistic vocabulary, leading to the creation of large, imposing cactus-like flowers and alluring white-petalled blossoms.

Throwing the initial form on a wheel, Koike hand-applies layers of Shigaraki clay that are pinched, pulled, carved and inscribed with linear raked patterning, and then coated with two layers of creamy white glaze. Often made with open mouths, her larger forms appear "ready to receive something" as if intended as flower or shell-shaped receptacles.

One of the first female graduates in the ceramics department of the prestigious Tokyo National University of Fine Arts & Music, Koike was awarded the Salon de Printemps prize for her graduation work. Pioneering in a field previously the exclusive domain of Japanese men, Koike was also one of the earliest women to become a self-supporting studio artist. While influenced by teachers at university and her mother Koike Chie, a prominent Japanese fashion designer, she departed from these earlier influences to formulate her own vision focused on forms found in nature.

Koike is already a celebrated artist in the West with works in major museum collections throughout the U.S. and Europe. Last year she was awarded the highly important Japan Ceramic Society Prize. She has been featured in two Japanese public television shows devoted solely to her work.