Round teabowl with irregular mouth, covered with Tamba glaze 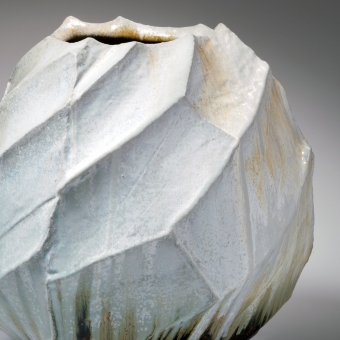 A native of the centuries-old Japanese ceramic region, Tachikui, NISHIHATA Tadashi (b.1948) comes from a lineage of distinguished artists stretching back to the eighteenth century. Tamba, one of the six ancient Japanese kiln sites, is famous for simple and austere functional ceramics made from iron-rich local clay and covered in natural ash glazes. Nishihata creates works that reflect not only his mastery of the region's techniques but also his keen sense of modern aesthetics.

After decades of experimentation,  Nishihata first won acclaim in Japan for his reinvention of akadobe slip-glazing, a Momoyama era (1573-1615) technique for creating deep brick-red surfaces through an application of mud before a prolonged wood firing.  Further, his inventive use of a signature blue-green ash-glaze (hai-yu) on diagonally faceted surfaces has proven to be equally captivating. Using this glaze and body combination allows him both to reference the natural world and create a strikingly modern vessel. Often, he punctuates the surface patterning with an additional iron-oxide glaze. These thick glazes cascading down the often-rounded triangular vessels call to mind waterfalls or snowfall on a mountain slope. Nishihata says of this unique approach:

"With my ceramics, I strive to evoke flowing water, mountain ridges or forests of trees while always bearing in mind which shapes will bring out the allure of the clay itself."

After a decade of winning prizes for his powerful vessels, Nishihata was presented in 2016, the Award of Cultural Merit (Bunkashō) by Hyogo Prefecture. His lushly glazed ceramics are exhibited internationally and have found homes in numerous museum collections including the Asian Art Museum, San Francisco; Museum of Fine Arts Boston; Minneapolis Institute of Art; and British Museum.

Joan B Mirviss LTD is delighted to present our second solo exhibition with this gifted clay artist.  Surpassing Tradition: Redefining Tamba opens on November 5 and runs through December 20, 2019 and will feature fifteen new masterworks, all showcasing his innovative use of traditional Tamba-style glazes.