Flattened, round vessel with conical top and black and red iron-glazed design

Glazed stoneware with wooden base

WORK 16-13; Persimmon iron-glazed, rounded square vase with winged base and three spherical ears, decorated in circular and slashed patterning in black on red

WORK 16-4; Triple lobed, slightly flattened sculptural vase, decorated with a band of circles with key patterning in rich blue over black with dots in green chartreuse

WORK 16-2; triple lobed vessel with linear patterning in red over black with dots of green 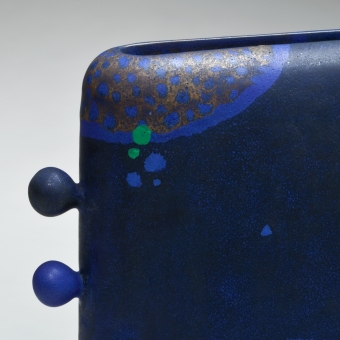 THE RESONANCE BETWEEN FORM AND COLOR II: Ceramic Art of Morino Hiroaki Taimei

Joan B Mirviss LTD at The Salon Art + Design

It is a special honor to announce the opening of The Resonance Between Form and Color II: Ceramic Art of Morino Hiroaki Taimei at The Salon Art + Design. Widely celebrated for his ability to create elegant and original forms, Morino Hiroaki Taimei (b. 1934) returns after more than ten years since his first highly successful solo exhibition with Joan B Mirviss LTD to present richly colored vessels and sculptures that explore the boundaries of ceramic art. Although based in utility, the stunning vessels featured in this show are equally strong as non-functional works. They transcend their traditional purpose into the realm of avant-garde with features such as extended conical tops, spherical ears and winged bases. Similarly, Morino’s innovative slab-built sculptures are riddled with pipe-like appendages that arch in and around central perforations. Using these cutouts, he incorporates the concept of ma into his artworks, a conscious use of negative space that communicates with its viewer. In both types of work, Morino applies contrasting matte-colored glazes, often highlighted in subdued tones of silver. His signature undulating waves, playful circles and linear motifs are the final touches that seamlessly blend his polychrome hues with modern, geometric forms.

Morino began his eminent career in ceramics at Kyoto City University of Arts, where he had the fortuitous opportunity to study under Living National Treasures Tomimoto Kenkichi (1886-1963) and Fujimoto Yoshimichi (Nōdō) (1919-1992). Their emphasis on decorative styles played a formative role in Morino’s distinctive use of abstract patterning. In the mid-1960s, he also spent several years as an instructor in the art department at the University of Chicago, exposing him to unique, Chicago-style artistic trends. His Kyoto sensibilities were consequently enhanced with subtle international flavors that have captured the attention of collectors and curators worldwide.

Morino has received countless prestigious awards and his ceramics have been featured in over 150 exhibitions worldwide over multiple decades. More than 60 prominent museums spanning four continents feature his works in their permanent collections including the Metropolitan Museum of Art, New York, NY; National Museums of Modern Art, Kyoto and Tokyo; and Victoria & Albert Museum, London.

Joan B Mirviss is the leading western dealer in the field of modern and contemporary Japanese ceramics, and from her New York gallery on Madison Avenue, Joan B Mirviss LTD exclusively represents top Japanese clay artists. As a widely published and highly respected specialist in her field for over thirty-five years, Mirviss has advised and built collections for many museums, major private collectors, and corporations. The Resonance Between Form and Color II: The Ceramic Art of Morino Hiroaki Taimei will first be shown at The Salon: Art + Design (November 10-14) and thereafter at Joan B Mirviss LTD (Nov.15 - Dec.16).

For more information or to request high-resolution images, please call 212-799-4021 or email director@mirviss.com.